I know some superb writers who have a funny little quirk in their writing; namely that they misuse that and who. It’s quite common, actually, and as far as word choice errors go, this is the one to have. It rarely impairs readability. However, sometimes it does make sentences slightly unclear, and on that basis I would flag up a substitution of that for who as an error.

Now, my editing clients know that I don’t just edit their work; I also try to help them improve their writing skills if they so desire. That means that I’ll make comments on  issues. If the issues are reoccurring, I try to help by making my comments…memorable. When you are speaking about things, use that.

When you are speaking about people, use who or whom.

While using who in the place of that sounds strange, a lot of people do not notice when they use that in the place of who or whom. They may say, “I know a guy that goes to a great Armenian restaurant a lot.” However, it should be, “I know a guy who goes to a great Armenian restaurant a lot.” “My professor is the type of person who really wants her students to learn.” “My mentor is a woman for whom money comes second to professional satisfaction.” 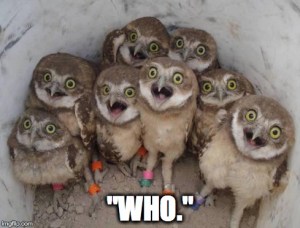 This is the comment my client will receive the next time he makes this error. Yes, he will.

Wait, uh, those owls. What about animals? Or aliens?

Truthfully, that depends. You will need to determine what level of personhood you’re assigning your owls, or animals, or aliens. If you’re talking about your childhood dog and things that he or she has done, you may feel more comfortable using who. If you’re talking about an abstract concept of cats who like to knock things over, you may want to use that–although the cats will never forgive you. Aliens? You may need to measure their slime to limb quotient, but if they’re acting like people, you’ll probably want to refer to them like people. Since they have rayguns and all, and you don’t want to be the person who got zapped first. Just saying. Yeah…that.